Posted in GK Club
Author: gktoday  Published Date: November 9, 2018  Leave a Comment on The celestial bodies and its statistics 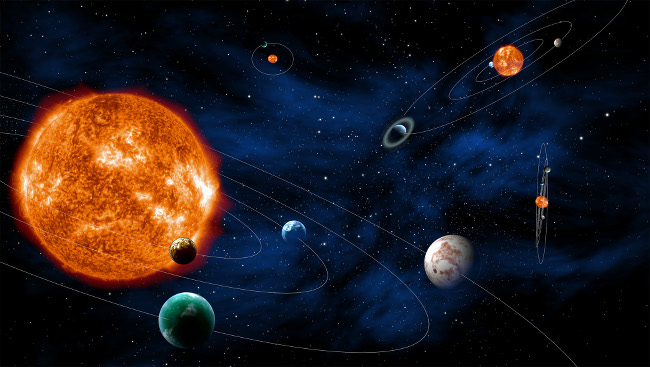 The celestial bodies revolves around the Sun, which includes 8 planets, 180 satellites, comets, meteors and asteroids, together constitute the Solar System.

The list of top 10 Planets with the largest number of moons or natural satellites are given below along with their number of satellite:

It is the most massive and second-largest (by volume) dwarf planet in the known Solar System. This was discovered by a Palomar Observatory-based team led by Mike Brown in January 2005.

It is a dwarf planet and discovered by a team led by Michael E. Brown on March 31, 2005. It is one of the bodies that caused Pluto to lose its status as a planet.

It is the third planet from the sun and only planet known to have an atmosphere containing free oxygen, oceans of water on its surface and, of course, life.

It is the fourth planet from the Sun and the second-smallest planet in the Solar System after Mercury. It is named after the Roman god of war, and is often referred to as the “Red Planet”.

It is a dwarf planet in the Kuiper belt, a ring of bodies beyond Neptune. It was discovered by Clyde Tombaugh in 1930 but after

Which Planet in Our Solar System has highest Gravitational Force?

It is the seventh planet from the Sun and it is larger in diameter but smaller in mass than Neptune. It has similar composition like Neptune, and both have bulk chemical compositions which differ from that of the larger gas giants Jupiter and Saturn.

It is the sixth planet from the Sun and the second-largest in the Solar System, after Jupiter. It is named after the Roman god of agriculture.

It is the fifth planet from the Sun and named after the Roman god Jupiter.

Planets with the Largest Number of Moons