A Horse Walks Into a Bar, his novel about a standup comedian’s public breakdown, scoops £50,000 prize to be shared with translator Jessica Cohen

London: David Grossman’s “ambitious high-wire act of a novel”, A Horse Walks into a Bar, set around a standup comic’s rambling and confessional routine in an Israeli comedy club, has won the Man Booker International prize for the year’s best fiction in translation.

Set in a small Israeli town, the novel is focused entirely on the act of comedian Dovaleh Greenstein. Taking to the stage to needle his audience with vulgar and aggressive jokes, Greenstein’s repellent performance begins to crumble as he reveals a fateful and gruesome decision he once made, which has haunted him ever since.

“David Grossman has attempted an ambitious high-wire act of a novel, and he’s pulled it off spectacularly,” said the chair of judges and director of the Edinburgh international book festival Nick Barley. “A Horse Walks into a Bar shines a spotlight on the effects of grief, without any hint of sentimentality. The central character is challenging and flawed, but completely compelling. We were bowled over by Grossman’s willingness to take emotional as well as stylistic risks: every sentence counts, every word matters in this supreme example of the writer’s craft.”

In his Guardian review, author Ian Sansom wrote: “This isn’t just a book about Israel: it’s about people and societies horribly malfunctioning. Sometimes we can only apprehend these truths through story – and Grossman, like Dovaleh, has become a master of the truth-telling tale.”

Grossman, a bestselling writer of fiction, nonfiction and children’s books who has been translated into 36 languages, will share the £50,000 prize with his English translator, Jessica Cohen. Cohen had previously worked with Grossman on 2008’s To the End of the Land, which was deemed “without question one of the most powerful and moving novels I have ever read” by British critic Jacqueline Rose.

Born and still based in Jerusalem, Grossman has long been recognised as one of the world’s great novelists, with awards including the French Chevalier de l’Ordre des Arts et des Lettres, Germany’s Buxtehuder Bulle, Rome’s Premio per la pace e l’azione umanitaria, the Frankfurt peace prize, and Israel’s Emet prize. 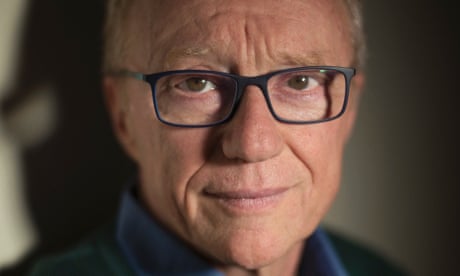 David Grossman: ‘You have to act against the gravity of grief – to decide you won’t fall’

He was announced as the winner at a ceremony at the V&A Museum in London on Wednesday night. His novel was selected as the winner from 126 titles, which were whittled down to a 13-book longlist and a six-book shortlist, pitting him against writers from Denmark, France, Norway and Argentina. Fellow Israeli heavyweight Amos Oz was among the final contenders, who also included the Norwegian Dorthe Nors and Argentinian debut author Samanta Schweblin.