Posted in Do You Know, Science Club, Science GK
Author: gktoday  Published Date: September 4, 2017  Leave a Comment on What’s the Difference Between a Hydrogen Bomb and a Regular Atomic Bomb?

How do nuclear weapons work?

The first atomic weapons, like those dropped by the United States on the Japanese cities of Hiroshima and Nagasaki in World War II, did that with fission — splitting unstable uranium or plutonium atoms so that their subatomic neutrons fly free, smash up more atoms and create a devastating blast.

How is a hydrogen bomb different?

A hydrogen bomb, also called a thermonuclear bomb or an H-bomb, uses a second stage of reactions to magnify the force of an atomic explosion.

That stage is fusion — mashing hydrogen atoms together in the same process that fuels the sun. When these relatively light atoms join together, they unleash neutrons in a wave of destructive energy.

A hydrogen weapon uses an initial nuclear fission explosion to create a tremendous pulse that compresses and fuses small amounts of deuterium and tritium, kinds of hydrogen, near the heart of the bomb. The swarms of neutrons set free can ramp up the explosive chain reaction of a uranium layer wrapped around it, creating a blast far more devastating than uranium fission alone. 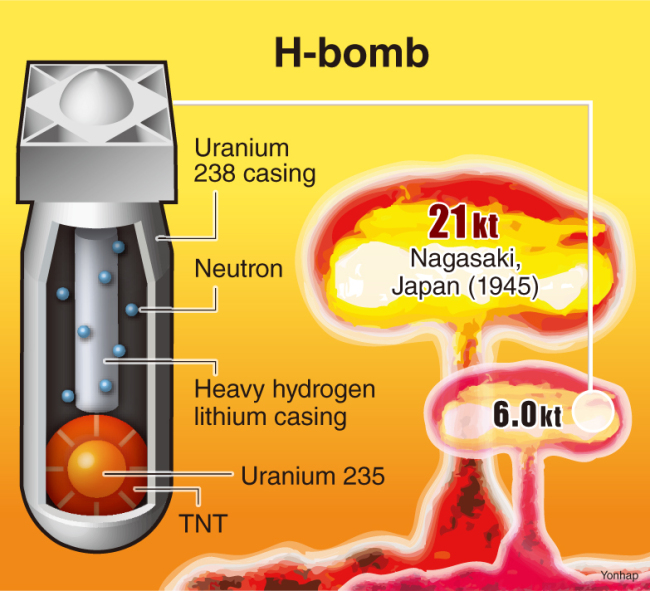 The United States tested a hydrogen bomb at Bikini Atoll in 1954 that was over 1,000 times more powerful than the atomic bomb dropped on Hiroshima in 1945. Britain, China, France and Russia have also created hydrogen bombs.